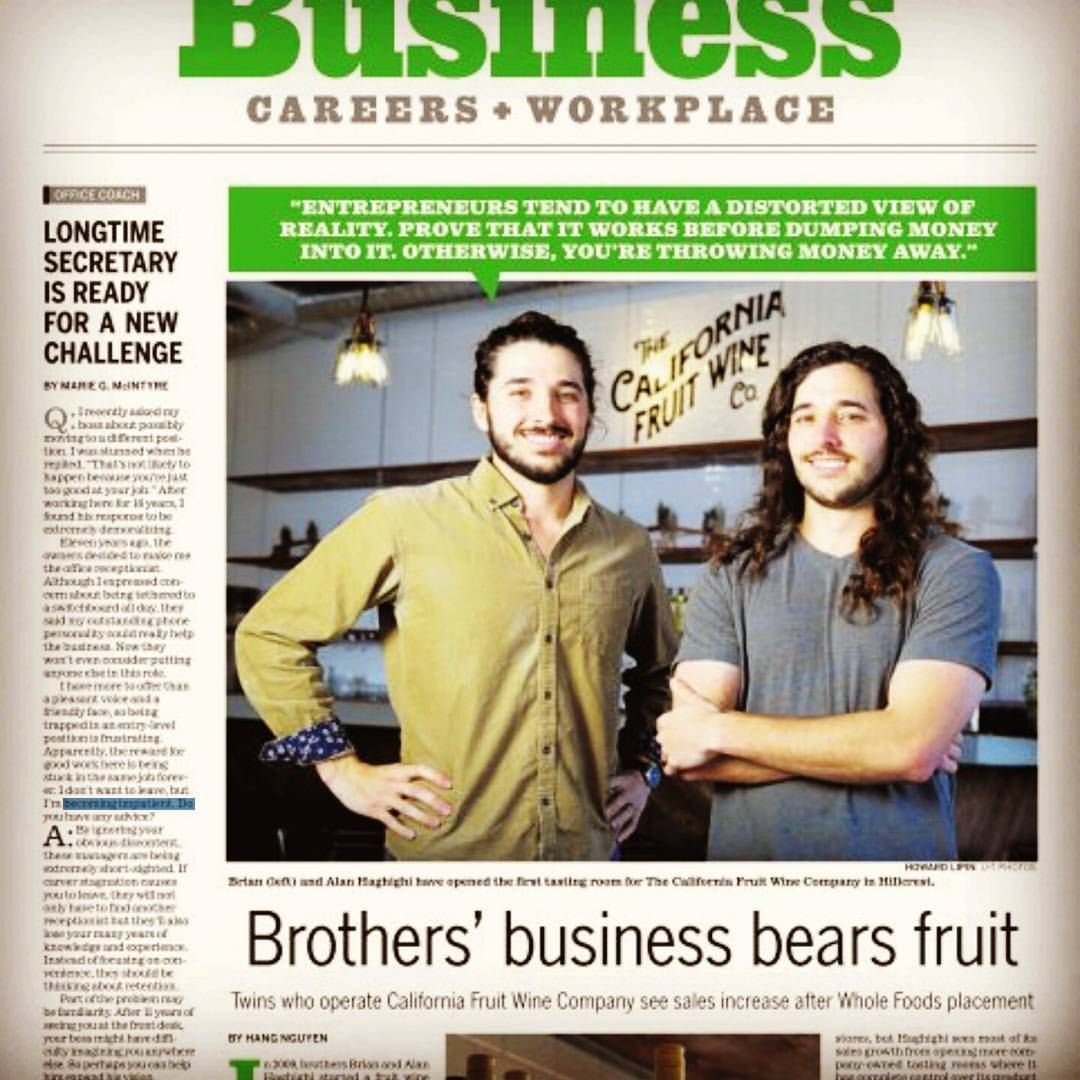 Carlsbad-based The California Fruit Wine Company sells wine fermented from fruits other than grapes, such as pomegranate, mango, cranberry and pineapple. At first, the identical twin brothers were peddling their wines at street fairs and farmers markets in San Diego.

"We were selling 10 cases of wine at a street fair," Brian Haghighi said. "It was only $1,500. But that gave us the confidence that people are interested. People are willing to buy without tasting it."

Today, its wines and sangrias, a blend of its fruit wines, which range from about $10.99 to $12.99 a bottle, are stocked on shelves at about 100 Whole Foods stores in California, Arizona, Nevada and Hawaii. The 12-employee company has a 7,000-square-foot headquarters with a production facility and a 3,000-square-foot tasting room. And in the last few years, the company raised about $2 million, mostly from customers, Haghighi said.

Last year, company sales were about $350,000, a 40 percent increase from 2015, the year it began selling in Whole Foods. Haghighi hopes to become profitable this year.

The California Fruit Wine Company will continue to sell at grocery stores, but Haghighi sees most of its sales growth from opening more company-owned tasting rooms where it has complete control over its product presentation. It opened its first tasting room, which also serves food, this past November in Hillcrest .

And the company is transitioning its brand from fruit wine to fruit craft. It plans to expand in cider, sparkling wine, craft cocktails made with fruit wines and eau de vie, a distilled beverage made from fruit other than grapes. Eventually, it hopes its fruit wines will make up only about a quarter of sales.

That's because it's been hard to overcome the negative impression that fruit wines are dessert wines. They are not. Fruit wines have more sugar than a dry wine but less than a dessert wine.

"We've been trying to educate people on fruit wine for so long, but education is expensive," Haghighi said. "Man, we know people like our product, but there's a perception problem. Fruit wines are the step child of the wine industry. So we're pivoting to be more successful."

Below, Brian Haghighi chats about why they decided to get into the wine business and what it's like to work with family and offers some business advice.

Q: What did you do before you started The California Fruit Wine Company?

A: I attended college in New York at Colgate University. I was a science major. I graduated in 2009 when the economy was quite bad. People were in hiring freezes. There weren't many options outside of doing something ourselves. Alan went the rebellious route. He didn't do college. He took some classes at junior college. He was a valet driver, which gave him the flexibility to do something else. The situation forced our hand to do something entrepreneurial sooner than I would have (liked). That's when you pull yourself up by your boot straps. That's when you dig deep.

Q: Why did the two of you decide to make wine when neither of you consumed much wine before then?

A: In 2009, the craft beer industry was just starting to get major momentum. So we kind of saw innovation in that space. But we wanted to do something different. Yes, we didn't drink wine. But we certainly knew what our friends were drinking. We knew what they liked. We knew people's palettes. And alcohol is sexy, (which helps with) word of mouth.

Q: You're the CEO. Your identical twin brother is the CFO. What's it like to work with family?

A: Our relationship is personal first and professional second. For the last seven years, I think the way we communicate, work doesn't have that professional censorship. We're both very, very honest, raw and unfiltered. I think that's not traditional for business.

Q: Does that make it easier or harder to work together?

A: It makes it better because we are not mincing our words. It makes it more difficult because the way we communicate can be abrasive instead of collegial.

Q: What has been your biggest leadership mistake?

A: In many ways, you get what you pay for. What I'm getting at is human capital is expensive. The challenge for startups is trying to save money. (But hiring is also) an investment. Find the right people. Fire the wrong people. And fire quickly if they don't perform after three months. (Before then), give reviews, constantly give feedback. Don't be passive aggressive. We're all grown-ups. If it's not the right fit, pull off the Band-Aid. There's no benefit to dragging it out.

Hiring really requires looking past how much you like the person. Make sure this person is a master at that skill and their values align with your values. The skills set is more valuable than the cultural aspect. The culture can be adopted. The skill set is what drives the bottom line. You get good at (hiring) once you make mistakes. Don't hire the first person you interview. You don't have time to invest in their development. Pay more to get the right person.

Q: What business advice do you wish someone would have given you?

A: Entrepreneurs tend to have a distorted view of reality. Prove that it works before dumping money into it. Otherwise, you're throwing money away. We've learned that lesson the hard way. Yes, the best entrepreneurs come from failures, but be as calculated and deliberate as possible. Don't shoot for the moon for the first, second or third year. Let that come when it comes.

(For example), last year, we had this success selling to grocery chains, so we hired a local sales force trying to side skirt distributors (which take a cut of sales.) Forget the distributor. They are order takers. They are a pill to work with. We'll go direct. We didn't want to waste another year. We hired sales (employees), 12 at our peak. We moved very quickly. It cost more than it brought in. We underestimated the value the distributor brought, (which is consolidation). (Grocery chains,) restaurants don't want to deal with the back-office administration. They want one person to talk to, one bill to pay. We should have proved that out (first before diving in.)

Because the brothers had a difficult time raising money from venture capitalists, they plan to give about 80 percent of their future profits to financially struggling startups that also embrace this business model.

Hang Nguyen is a freelance writer based in Los Angeles.